Summer time is awesome.  Somehow, last summer didn't feel quite as awesome, so I'm trying hard to make up for lost time.  So yesterday, I had a couple of appointments (one of the REALLY fun parts of summer-going to all those doctor's appointments you can't schedule during school because taking a whole day off to go see a doctor??!!!) and in between, I had time to read.  I TORE through this book because I couldn't stop reading it!  I was sorry when it was over too, so maybe I'll have to go back and re-read it.  It was that good!  It's called Hollow Chest and it's Brita Sandstrom's debut novel.

The main character is 12 year old Charlie.  Charlie lives with his mom and his grandfather.  His grandfather is a veteran of World War 1 and is missing his left arm.  His mom works hard and provides the income for the family.  Charlie's dad was killed in a bombing and his brother, Theo, has been serving in the war.  But Theo is on his way home and it's really all he can think about-how things will be able to all go back to normal once Theo gets home.  But it doesn't really work like that, does it?  Charlie gets a preview of what Theo might be like when Charlie goes to the hospital to bring cards to the war veterans.  Charlie meets Reggie and he starts to think about how Theo might be different after the war.  He also starts seeing wolves that no one else can see and hearing about the wolves from his grandfather, the homeless lady in the village, from Reggie.  The wolves have an integral part to play in the story, not only in the trauma part but also in the healing.  This is an amazing story and the World War 2 part of it is great, but the idea of the wolves feeding off the trauma of humans is brilliant.  I think this would be a wonderful book to read with kids to open up this conversation of trauma and how you might be able to move forward with your life after it.  I can't wait to give this one to kids I know. 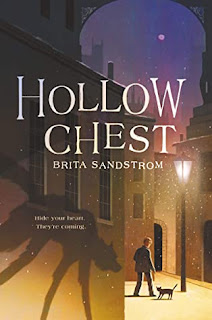 The second one is a really fun summer read-it's called Even and Odd by Sarah Beth Durst.  I adore Durst's work.  I thought her book "The Girl Who Could Not Dream" was one of my most favorite books ever!  This one just as much fun.  It's about two sisters, Emma and Olivia, who have magical powers on opposite days, so they are called Even and Odd.  Even really loves magic and is dying to take her magical certification test.  It falls on a even day this time around so Even has been practicing as much as she can on her magical days but it's never quite as much as she hopes.  Odd would rather not be magic.  She doesn't enjoy using magic and in fact, sometimes it gets in her way when she's trying to do the things she really likes, like rescuing kittens.  The girls live with their parents, who are also magical.  They run a store at a magical outpost that provides a safe passage to and from the magical world.  Unfortunately, magic seems to be on the fritz.  The girls' mom goes to the magical side to see if she can figure out what's wrong and as they're waiting for her to get back, the girls find themselves trying to help a unicorn cross back over to the magical side and end up stuck on the magical side themselves.  This story is funny and exciting and really compelling.  As usual, Durst has a gift for very funny dialogue-she has such a great ear for different voices.  I loved these characters.  I'd love to read more stories with them!  Don't miss it! 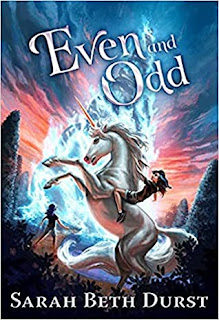