I'm having SUCH a good time reading middle grade speculative (or fantasy) fiction for the CYBILS awards.  I LOVE being a first round panelist.  It can seem overwhelming at times (90 chapter books before Christmas?!  GAH!!) and then you open one up and it's awesome and amazing and wonderful and then you remember, why it seems like such a good idea to do this!

This first one is exactly like that.  It's called "The Spinner of Dreams" by K. A. Reynolds.  It's about Annalise, who is 12 and was born cursed.  Her left hand is twice the size of her right and it has a black broken heart on it.  The people of the village know about the curse and are not happy to have someone cursed living in their midst, so her wonderfully kind and loving parents have built fences around the house to protect her but as she had grown bigger, her big hand had grown more powerful and the people of town more afraid of her.  Her parents decide to get her a pet (since she doesn't have any friends) but when they go to the shelter, they find the perfect cat (one that can talk!) but it runs away before they can take it home.  Annalise is bereft but has a bit of a revelation.  She's going to go to the Fate Spinner and ask to have the curse removed.  So, she leaves a note for her parents and sets out on an epic adventure.  This magical adventure involves a magic cat (named Muse, can you think of a more perfect name for a cat?), a three legged fox, talking trees, a very angry and cursed sorceress, mythical and magical beasts, harrowing danger, and wild plot twists.  There is also some very amazing writing and some of the best similes I've read in quite some time. (like this one - "she was as thirsty as a salted slug").  There are big themes of friendship, loyalty, and persistence.  I adored Annalise and I was sorry when the book was over!  And I can't say enough about what a great writer K. A. Reynolds is-more than once during the story, her beautiful words brought me to tears, including this amazing quote -  "Never be sorry for showing the world who you are or who you wish to become...These struggles have brought you exactly where you need to be." Our kids need to hear messages like this over and over and over again. Make sure this one ends up in your library! 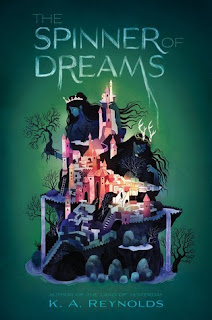 The second one is called "A Wolf Named Wander" by Rosanne Parry.  It's based on a true story, but it's written from a wolf's point of voice, which is why it ended up in the speculative fiction pile rather than the realistic fiction pile.  It's beautifully written in a voice that makes you wish you could actually be friends with the storyteller, who is a wolf named Swift.  The story starts with Swift and his litter mates in the den and follows Swift's life as he becomes more independent but how tragically, he is separated from the rest of his pack.  But he perseveres and makes a new life for himself.  At the end of the book, there is information about the particular wolf that inspired the story, as well as some scientific information about wolves.  I think the kids will like this one a lot.  My students are really interested in the wolves and this story is really compellingly written-it's hard to put down!  I think fourth grade and up will love this one. 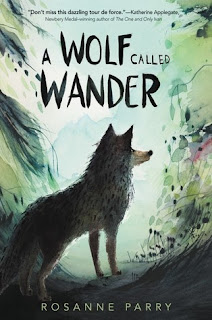 I've been plowing through the fantasy fiction list for  CYBILS.  The librarians at my local library are stunned that I want to check out 12 books at a time.  I'm not sure if they're more surprised that I want to read that many or that I can CARRY that many at a time.  Either way, there have been some amazing titles!

The first one is called a companion, but I think you could totally call it a sequel.  I'm not sure how well it stands alone, because I loved the first one SO MUCH.  This one is called The Bootlace Magician and it's by Cassie Beasley.  It's the companion or sequel to Circus Mirandus, which came out a couple of years ago.  The Bootlace Magician opens with Micah living in the Circus Mirandus.  He's a knot tier and doesn't really see how tying knots is going to be anything magical but he keeps going.  His guardian, the Lightbender, gives him a lot of support, as do the other magicians in the Circus Mirandus.  Micah's hoping to see his friend Jenny, who lived near by, when Micah lived with his grandfather.  But some weird things are happening, birds are behaving strangely and Micah starts digging around in the Circus Mirandus and comes across some things about his family's past-specifically with his grandmother, Victoria, who left the Circus under mysterious circumstances.  What's great about this story, in addition to the amazing magic and awesome characters, is the big theme of finding yourself and your own magical story.  This is a terrific story for middle grade students and up who like fantasy fiction and don't mind some danger and scary parts.  I loved this one and I can't wait to put it in my library. 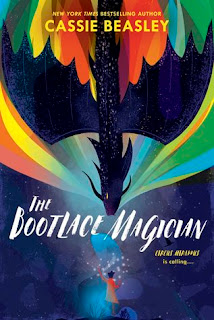 The second one is the start of a series of books about kids with magical powers.  This one is called The Revenge of Magic by James Riley.  It's about Fort Fitzgerald, who is lives through a terrifying event at the Lincoln Memorial.  He and his dad are there, sightseeing and minding their own business, when suddenly there's an earthquake and a monster comes up out of the abyss and snatches Fort's dad and takes him underground.  Fort isn't quite sure that's what really happened because everyone else seems to think it was more like just an earthquake and Fort's dad disappeared.  But Fort is sure a monster has his dad, and his only clue was a girl's voice in his head.  One day, when he's trying to put his life back together, living with his aunt, a man shows up and offers Fort a chance to come to a school that would help him figure out what really happened to his dad.  Fort jumps at the chance, but it turns out not everyone is so eager to have Fort there.  This is a very fast paced mystery, with plot twists that will leave you guessing.  The characters are interesting and relatable.  The monsters are scary and mysterious and there are also some scary government conspiracies thrown in for good measure.  This would also be a good one for middle graders.  I liked this one a lot too!


Posted by The Booksearch at 12:23 PM No comments:

I'm super excited to get to be a part of the CYBILS awards this year.  In case you don't know what that is, CYBILS is a group of people who blog about literature for young people and each year, they give out several awards in different categories.  I'm SO lucky this year to get to be part of the first round panelists for speculative fiction (which some people call fantasy fiction).  I've got a lot of reading to do over the next few weeks, but I thought I'd share a couple of the best ones here.

My first new favorite is science fiction.  It's called "We're Not From Here" by Geoff Rodkey.  This story starts with Lan, who is living with his (or possibly her-in the book, Lan's gender is never specified, which was amazing to me!) family on Mars.  Earth has become uninhabitable and Mars is on it's way to also becoming uninhabitable.  Happily, there is another planet (very far away) that is willing to take them.  So Lan's family along with another 2500 escapees from Earth and Mars, go into suspended animation for 20 years to reach their new home.  Except that when they get there, the leadership of the new planet doesn't want them any more and there's no where else for them to go.  Lan's mother persuades the leadership of the planet, Choom, to allow their family to come as an experiment and live there.  Part of what makes this book terrific is the idea of what it's like to go and live somewhere completely alien to you, the other part is the dialogue, which is hilariously on pitch.  The characters in the book are interesting and mostly people (and creatures) I'd like to get to know better.  I thought this one was terrific and I'm hoping there is going to be a sequel. My second new favorite is a combination of fairy tale and magical mystery.  It's called Twinchantment by Elise Allen.  The story opens with a tragic back story.  An evil magician comes to the king and kills off his family, except for one young son.  The new king defeats the evil magician along with a good magician and they banish all magic (except for the good magicians, who end up as a magical army) to a magical prison.  The story flashes forward several generations to a new young king and his pregnant queen, who is viciously attacked by the same evil magician.  The queen appears to survive the attack unscathed and gives birth to a beautiful baby girl named Flissara.  Except that Flissara is actually twins (which are considered exceptionally evil magic) and so they have been carefully hidden for their entire 11 nearly 12 years, with only one of them ever seen at a time.  The queen is attacked again and lays dying and girls decide they must go to the evil magical prison, get the evil magical wizard, and make him reverse the spell.  Except, things don't go according to the plan.  I really liked this one a lot.  The girls appear to have dark skin and dark curly hair (YAY for an African American princess magician!!!) and have completely different skill sets-Fliss is athletic and strong but struggles with making decisions and interacting with people.  Sara is artistic and a wonderful storyteller but is clumsy.  Together, they are strong and I loved, that as the story progressed, they both found that they didn't have to be limited by what they first thought were weaknesses.  I loved the dialogue in this one too and I loved the little surprises from different characters along the way.  This was a really fun book to read. 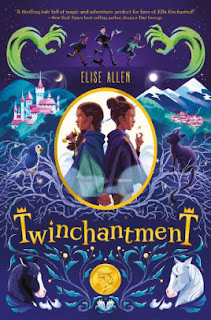