My husband and I just got back from our epic summer adventure.  It started June 17 and finished yesterday, July 18.  We drove 5,700 miles, visited 100s of relatives and friends, attended two professional conferences (one each) and a family reunion, and ate WAY more than we should have.  But we had a great time and are VERY pleased to be home.  Needless to say, there has been a gap in my reading, but I am totally caught up on my talking and chatting skills!

Last night I finished one that I've been reading for awhile.  It didn't take me a long time because it was boring, it took a long time because I kept getting interrupted.  It's called "The Left Handed Fate" and it's by Kate Milford.  You might remember Kate Milford's early work that got a lot of buzz, called "The Green Glass House".  That one was a very excellent mystery and this one is too.  "The Left Handed Fate" is set on a pirate ship in 1812 and has an amazing array of characters.  One of the main characters is Lucy, who is the daughter of Captain.  She has a half brother Liao, who loves fireworks and is in charge of a young man, named Max, who is trying to find the world's greatest weapon.  They are being chased by the French, who would also like to have the weapon but are captured by Americans.  There are some very exciting chases, some excellent magic, as well as plot twists and some very funny writing.  It also has a connection to the "Green Glass House" which is mentioned in the author's notes (because I totally missed it).  I think this one would work for upper middle grade and high school-it's kind of big for the littler kids. 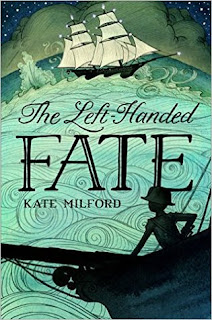 The second one I read is my one of my students' favorite authors, Tom Angleberger.  It's called "Fuzzy" and it's a science fiction story about a girl named Max (short for Maxine).  Max attends a local middle school that is being run by robots.  There are teachers there but everyone is monitored by a computer called Barbara.  Large amounts of data are gathered on the kids and the adults at school and are shared with parents, teachers, and administrators.  One day, some scientists come in with a project.  They have a really smart robot that SHOULD be able to learn and adapt to it's surroundings.  They want to try it out in a middle school before sending it to Mars.  Max is selected to act as the robot's guide.  This is a really fun book to read and I think the kids are going to like it a lot.  It's very fast paced and there are some very likable characters.  What will be very interesting about this book is to see if teachers and the kids pick up on some of the social commentary about the use of technology in schools, the use of technology in the military, and what really makes people human.  It's going to pair well with another new book that just came out called "The Wild Robot" by Peter Brown, which is also about a robot that can learn it's environment. 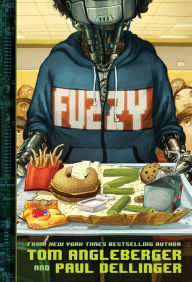 The last one is also a mystery.  It's called "The Thief's Apprentice" by Bryan Methods.  It's set in England vaguely in the past.  The main character, Oliver, is an ordinary boy who lives with his parents who are very well to do (his dad owns an engineering firm).  At the beginning of the story, Oliver is intrigued by a series of thefts of art.  The thief steals the art but then returns it a few days later.  Scotland Yard has nicknamed the thief "The Ruminating Claw".  I don't want to spoil the fun for you, but let me tell you, there are some great plot twists and some terrifically funny dialogue.  Even better, this one looks to be the beginning of a series.  Don't miss this one! 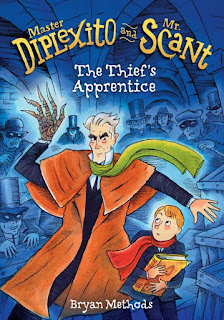 Posted by The Booksearch at 7:26 AM No comments: