I don't usually read ghost stories.  I don't really like to be scared (there's enough scary stuff in the world for me-keep it out of my head!).  But I read a couple this week that were quite remarkable!

The first one is called "Olive and the Backstage Ghost" by Michelle Schusterman.  It's about Olive who lives with her mom.  Her mom used to be a famous singer and now she wants Olive to be a famous singer.  Olive's dad has disappeared?  Gone away?  Died?  It's a bit mysterious about what actually happened to dad, but he's not in the picture.  Olive is feeling over pressured by her mother and when she does poorly at an important audition, Olive runs out looking for an escape.  She finds solace at the Maudeville theatre, a beautiful old theater she never noticed before.  She finds people who appreciate her talents and want to make her a star, but there's something not quite right.  This is a super creepy story with a kind of an alternate reality.  It's kind of like "Coraline" by Neil Gaiman.  The parents story lines are a little thin but it's an exciting story to read. 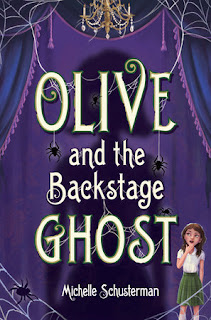 The second one is called "Journey's End" by Rachel Hawkins.  It's about a girl named Nolie who is following her dad, a scientist, to a small town in Scotland from her hometown in GA.  Her parents are divorcing, which feels terrible to Nolie but she's excited to go to Scotland and happy to see her dad.  The town called Journey's End is on the coast and her dad is studying a fog bank.  People have been known to disappear into the fog back and then are never seen again.  Nolie meets a girl who lives in town-Bel's family runs a small gift shop in town and have deep roots there.   They do NOT have a good relationship with the scientists.  They believe that the scientists will damage their town's claim to fame and ruin their tourist business.  The story also flashes around in time to some of the victims of the fog.  One day, a boy no one knows turns up and things start changing pretty fast.  I liked this exciting ghost story.  I really liked the characters, who were funny and adventurous.  I also liked the Scottish language lessons that got thrown in a long the way.  I'm going to go and order a few of these for my school library RIGHT NOW. 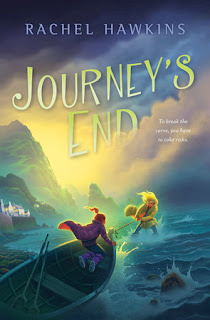 The last one is a BRAND NEW book, it was just released in October.  It's called "The Bone Thief" by Alyson Noel.  It's about a boy who feels like he just doesn't fit in.  Grimsly Summerfield is completely and resolutely normal and that's the problem.  Grimsly lives in a magical town called Quiver Hollows.  He was discovered there by his guardian, Professor Snelling.  He's been surrounded by magic and taught by the best, but he is resolutely NOT magical.  His best friends, Ming (who can levitate), Ollie (who's been bending spoons since he was a baby) and Penelope (who doesn't really speak much but can send telepathic messages) are very supportive, but one day the magic starts disappearing from the town and the townspeople (who are somewhat less supportive) believe it has something to do with Grimsly.  So Grimsly sets out on a quest to set things right.  This is a very fast paced, very funny magical story where the ghosts that do the haunting are the scariest kind-the ones with no love.  This one will be great in an elementary or middle school library. 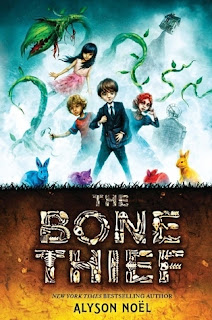 Posted by The Booksearch at 4:44 AM No comments:

I'm plowing through the CYBILS middle grade speculative fiction.  There were a few dogs in the pile but I've hit a bit of a hot streak and it's SO much fun to read such imaginative, creative, exciting stories!  Check out these beauties!

The first one is called "The Shadow Cipher" and it's the first one a series called York by Laura Ruby.  I'm relieved that this only the first one because the characters and plot of this one were so interesting, I was really sorry for the book to end!  It's about fraternal twins, Tess and Theo, who live with their parents in an old apartment building in New York.  The apartment has been in their family for several generations and there is a story about a mysterious treasure that's hidden with lots of clues and ciphers.  They connect with a boy who lives in their building, Jaime, who is a computer whiz.  He lives with his grandmother, the building's caretaker.  Suddenly, they have a very sharp deadline for solving the mystery, a developer has purchased the building and is planning to knock it down and build something more modern.  One of the things that's really great about this book is the setting, which is New York, present day, sort of.  There are a lot of things in the book that are realistic, like subways and cellphones, but there are lot of things in the book that are very fantastic-like the Guardians in the subways that are robots but very lifelike robots.  Or the cat that is Tess's therapy animal, that weighs 45 pounds and likes to fetch things like socks.  The characters in this one are great (like the 6 year old annoyance who also lives in the building or the super creepy bearers of bad news).  I really loved this one and I think the kids are going to like it too.  In case you're interested, here's a link to her webpage that has an excerpt.  And here's a link to the publishers page and it has a part of the audiobook. 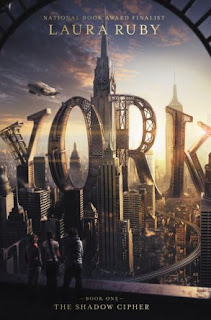 The second one is a very fun fairy tale.  I DO love a good fairy tale and this one is particularly excellent.  It's called "The Dragon with a Chocolate Heart" by Stephanie Burgis.  It's about Aventurine who is a young dragon.  Her favorite pastimes are annoying her older brother and dreaming about escaping the family lair (even though it's full of treasure and a family who loves her).  She has an older sister that is very famous in the dragon world (she writes poetry that dragons love) and worries that she will never find her passion.  One afternoon, while everyone is resting (hunting is hard work!), Aventurine decides to make a run for it and busts out of the cave.  She is enthralled with the big wide world around her and hungry.  She smells something delicious (humans) and decides to pursue her prey.  And I flat out can not tell you any more (which is only like the first 10 pages) because it would totally ruin the book!  I will tell you that there are some amazing plot twists, some really funny characters, and some terrific themes of friendship, loyalty, and treachery as well as a terrific lesson on finding your passion, no matter what your family thinks.  This one was awesome and I can't wait to give it to my students.


The last one is a fairy tale.  It's called "Snow and Red" by Emily Winfield Martin.  It's the story of two sisters, Snow and Red who are basically living a fairy tale.  They have a loving mother and father who are wealthy enough to indulge most of their whims, when suddenly the father disappears and their lovely home and gardens are yanked out from under them and they have to go and live in a dilapidated cottage in the woods.  Both girls miss their father terribly and cope with the loss in different ways.  They often go walking through the forest, looking for food, entertainment, and their dad.  They come into contact with lots of interesting characters, some kind and some pretty evil.  The story is entertaining and well written.  What really set this one apart for me was the art work.  Each chapter has a beautiful full color embellishment and there are several full page watercolor pictures and decorations through out the book.  It gives the book a feeling of richness and tradition that I really liked.  I think the kids will like this one as well. 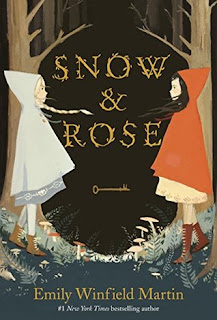 Posted by The Booksearch at 4:38 PM No comments: