We started school this week.  I love this time of year with all the new potential!  I'm so excited to share some of these new titles with my students this year.

Last week I read a terrific new one-it's called "Nowhere Boy" by Katherine Marsh.  It's the story of two boys (told from both points of view).  Max lives with his parents and his older (and perfect) sister.  They've just moved to Brussels and Max is not happy about it.  He's enrolled in a French school (he doesn't really speak French and has a tutor to help with that) but his parents think this will help some of the trouble he was having at his old school.  The other boy is Ahmed, who is fleeing Syria with his dad.  When his dad disappears trying to pull their small boat to safety, Ahmed finds himself alone in Brussels trying to avoid the police and make his way to England, where his dad thought they would be able to settle.  Ahmed ends up living in Max's basement and when Max finds him there, they both have to decide if they'll risk being friends as well as keeping each other's secrets.  It's a very topical story and gives a lot of background information on why emigrating from Syria is so difficult as well as some of the obstacles that refugees face.  It's probably most appropriate for the upper end of middle grade fiction-there are some fairly graphic descriptions of violence that might be too much for 3rd and 4th graders.  But it's a really compelling story that's hard to put down!  This would be an excellent book to pair with Alan Gratz's book "Refugee" or "Escape from Aleppo" by N. H. Senzai.

Here's a video that shows Katherine Marsh's inspiration for the book.

The second one is called "The Eleventh Trade" by Alyssa Hollingsworth.  I've had this one on my iPad for quite some time and it just kept getting pushed down to the bottom of the list.  I started it last night when I went to bed and finished it!  It was such an irresistible story I didn't want to stop reading it.

It's about Sami who emigrated to Boston from Afghanistan with his grandfather.  It wasn't an easy trip and the reasons why they left are terrible.  They've found a home in Boston but are struggling.  To make ends meet, they play music in the train station-a traditional Afghani instrument called a rebab.  When they each play the rebab, they feel more connected to Afghanistan and less homesick and sad.  But as Sami is playing the rebab, a teenager comes and steals the rebab.  Sami feels terrible and so does his grandfather, but they don't report it to the police (which I think could have opened up a different kind of story line but Hollingsworth didn't choose to go that way).  Sami talks to a boy at school the next day and finds out about the interesting world of pawn shops and stolen goods.  The boy, Dan, helps him find the rebab online at a local pawnshop.  Sami goes to the pawnshop but finds the pawnshop owner unsympathetic to his plight and wants Sami to pay $700 to get the rebab back.  While Sami's trying to figure out how to make money, another boy at school asks to trade for the key chain on Sami's backpack.  He's offering an iPod.  Although the key chain isn't worth very much, it holds some very special memories for Sami and he's reluctant to give it away, but he knows he could sell the iPod for a lot more.  So he trades.  But it turns out, the iPod is broken.  The first boy, Dan, has a plan to fix it and the story really takes off from there, with a complicated series of trades with kids that revolve around the soccer team that Dan invites Sami to join.  I thought this story was terrific.  It touched on a lot of different issues with why people emigrate, particularly from Afghanistan.  The characters that surrounded Sami were for the most part kind and giving (although there was an element of bullying) and I'd like to think that  kind and giving aspect is more reflective of the American spirit towards refugees rather than the bully.  This will be a great one for anybody who likes a well told story.  It's coming to live in my library really soon! 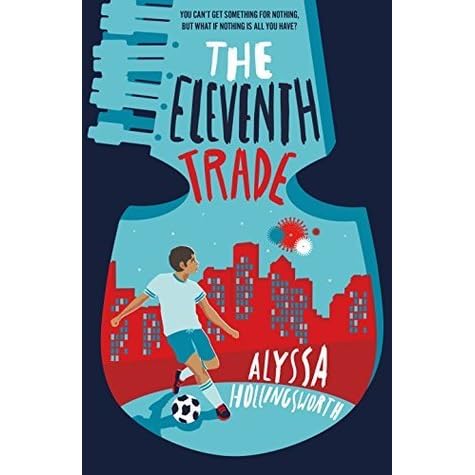 Here's an interview with the author.