Fantasy Fiction on the horizon

There's some brand new fantasy fiction waiting in the wings and boy, are they worth the wait!

This first one comes out in September.  It's called "Nevers" by Sara Cassidy.  It's set in a town called Nevers in the Burgundy Region of France.  Odette and her mother, Anneline, arrive there by cheese cart. They are poor and looking for a place to land.  Anneline has been unlucky in love - she's very beautiful and falls in love easily but all of her husbands have died and mostly they've been her fault.  Odette is a resourceful and practical girl who figures out how to get food and shelter.  Through a series of sometimes hilarious events, they solve a mystery (which I don't want to tell you about because it's so much fun figuring it out!).  There are some interesting historical pieces that lend a little weight to this very fun story as well as some beautiful figurative and philosophical language.  I thought this one was great.  It would be good for upper elementary, middle school, and possibly high school. 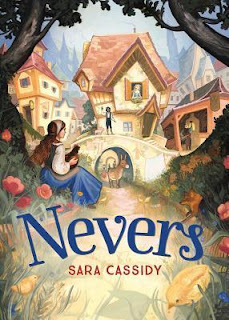 The second one is called "The Dark Lord Clementine" by Sarah Jean Horowitz.  It's about Clementine, who's 12 and she is the heir of the Dark Lord of Morcerous.  This fairly unusual-most of the Dark Lords have been men, but since Clementine is the only heir, it's definitely going to be her.  So Clementine has been trying to learn as much about magic as she can.  She loves the library in the castle and uses it often.  However, things have been slipping lately-the enchanted scarecrows that do most of the farm work have stopped working and her dad seems to be whittling away.  The whittling is coming from the Whittle Witch and he doesn't really seem to have a plan to stop it.  Clementine, trying to keep things together, ends up with a huntress, a band of boys from the village who want to be knights, a talking sheep, and a magical book called the Grimoire that was turned into a chicken so it lays eggs that are spells when it thinks Clementine needs them.  This is a funny and adventurous book with lots of heart.  I really liked this one a lot.  It would be good for upper elementary and middle school.  It comes out in October. 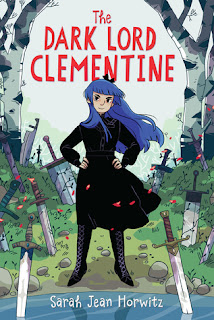 Summer vacation just started and so has the blissfully un-pressured reading!  I don't usually read science fiction (although I'm always surprised that I like it more than I think I will!).    There are two that I read that I really enjoyed.

The first one is not brand new.  It's one on the Sunshine State Young Reader Award List this year.  It's called "Enginerds" by Jarrett Lerner.  It's a short, fast read about Ken who is part of a group of kids that he's known since he was in kindergarten.  They all like science and engineering and each of them has a different strength.  One day, Ken comes home to find a box on his front step.  He often gets presents from his grandfather so it's not too big of a shock, but the box is really heavy.  So he calls his best friend, Dan, and Dan helps him lug the box and start putting the thing together. It turns out the thing is a robot, but the robot seems to have a pretty limited skill set.  All it wants to do is eat.  Well, and poop.  Except when it poops, the poops come out like bullets.  So how can you lose?  Pooping robots?  A bit of a mystery?  Total destruction of the earth?  The kids are going to LOVE this one.  And there's room for this one to be part of series, I can't wait to see what the enginerds are going to come up with next.  Here's Jarrett telling about the book!

The second one doesn't come out until September, but it's so much fun, I couldn't wait to tell you about it.  It's by Jon Scieszka, who is one of my favorite authors ever.  It's a new series called AstroNuts.  This one is Mission One.  It has four hilariously narrow characters- AlphaWolf, who thinks he should be in charge (of everything), Smart Hawk, the planner and explorer, Laser Shark, relentlessly positive and always hungry, and Stinkbug, the negative voice and repair guy.  They are blasting off from an emergency rocket that has been hidden inside Thomas Jefferson's nose in Mount Rushmore.    They've been sent because humans have finally crossed the line of having too much CO2 in the atmosphere.  The Astronuts are on a mission to find a Goldilocks planet, one that is just right for humans to live on-not too much oxygen or carbon dioxide, but just the right amount.   Their first mission is to go to the Plant Planet, where, unsurprisingly, there are plants.  No animals, just plants.  And that's what's cool about this book, beyond all the body humor, there's also some terrific science.  The AstroNuts find that the planet has a completely different atmosphere because of the plants and it explains why.  There are text boxes that give you background information on the characters, they write reports, graphs, and diagrams.  There's also some very straightforward information about climate change as well as an epic battle and evil villains.  On top of the cool science information and the funny characters is the art work.  It's collage of engraved images from the Rijksmuseum with bright colors and cartoons over the top.  It feels a little manic at first, but in a really good way.  I think the kids are going to love this one.   Here's a link to the book's webpage, which has information about how the art work was created as well as ideas for creating your own work. 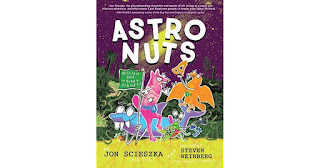 Posted by The Booksearch at 7:05 AM No comments: