This non fiction stuff I've been reading is AWESOME.  I can't wait to show these to my students and my teachers.  They are going to LOVE them.

The first one is called "The Slowest Book Ever" by April Pulley Sayre.  I have to admit the title put me off a bit.  Slow?  Really?  We live in a really fast paced time, why would I want to read about something slow?  Because it's awesome, that's why!  April put together an entire book of fascinating facts about plants, animals, rocks, and people that are all slow.  The book is written in a very conversational style, so it's sort of like having a super interesting friend tell you about all these things.  There are lots of graphical elements, kind of cartoony pictures that make the book move very fast.  There's a terrific glossary in the back along with reference notes and a very thorough index.  I keep thinking of people who might enjoy this one-like my best friend, my dad, I guess I'd better order several copies. 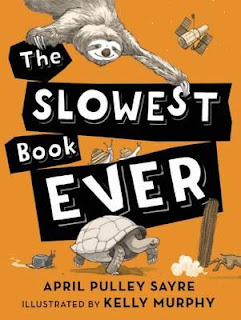 The second one is called "The Inventors of Lego Toys" by Erin Hagar.  I know just by the title that my students will be interested in this one, because, really, who doesn't love Legos?  We have a Lego club as part of our after school program and the kids really love it but I find adults love Legos too.  Even somebody as old as I am has fond memories of playing with Legos.  This book is all about Ole Kirk Christansen, who was a Danish carpenter.  He also really loved making toys and it turned out that the toys made better money than the carpentry work.  It talks about Ole Kirk's work ethic (it's better to make it right than to make it cheaply) as well as some of the terrible tragedies that befell him (his wife died leaving him to raise four boys alone and there were several devastating factory fires).  His sons took over the family business and made it into the world wide company it is today.  One of the things that's really great about this book is all the pictures and graphical elements.  There are diagrams and text boxes and lots of headings.  The text is interesting and keeps you turning the pages.    AND it's about Legos.  I think the kids are going to like this one a lot. 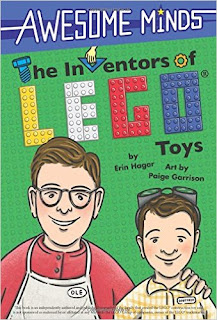 Here's a lovely little animated film that tells about the inventors of Legos.

The last one is another one my students are absolutely going to love.  It's called "Masters of Disguise: Amazing Animal Tricksters" by Rebecca L. Johnson.  It 10 chapters and each chapter is four pages long.  The first two pages have a narrative story about about the animal and how it uses it's camouflage.  The second two pages in the chapter tell about the science behind the camouflage and how scientists studied the animals.  There are up close pictures of the animals (which you may or may not want to look to closely at.  The first one is called an assassin bug and it uses the corpses of it's prey as camouflage.  The eeeewww factor on that one alone is totally worth the book) as well as pictures of the scientists who study the animals.  There is quite a bit of text on each page, so this one is going to be for bigger kids (upper elementary and middle school). 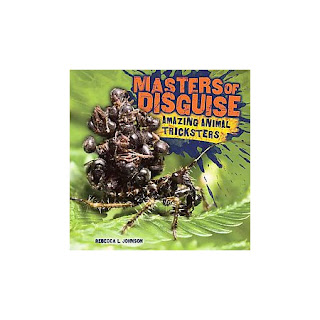 Posted by The Booksearch at 2:57 PM No comments:

The first one is a title I've been trying to get a hold of for quite some time.  It comes up often on lists of great non fiction books this year.  It's called "Pink is for Blowfish" by Jess Keating.  This is an informational  picture book about different animals.  They were chosen for the book because of their color-pink.  Each animal has a full page picture and the facing page has a text box with facts like their scientific name, diet, habitat and predators.  The facing page also has a cartoony picture of the animal along with a couple of facts about the animal.  The book is very brightly colored and because there isn't a lot of text, it's very accessible.  Some of the animals are pretty homely and some of the them are adorable and several of them will be the kind that kids show each other to say "ewwww".  It also has a glossary as well as a list of jobs you might want to have if you enjoy certain kinds of animals (love that part) and a list of web resources.  I can't wait to get this one into my library. 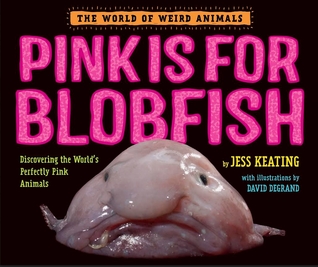 Here is the book trailer!

The second one is called "First Step: How one girl put segregation on trial" by Susan E. Goodman.  This picture book is mostly about a girl named Sarah Roberts.  Sarah started school as a four year old in Boston in 1847.  It doesn't tell how long she attended there before the police came and removed her from the school because it was an all white school.  As an African American, Sarah was expected to attend an African American school that was much further away and had many fewer resources.  Sarah's family filed suit and two attorneys, Robert Morris (an African American) and Charles Sumner (a Caucasian), tried the case before the Massachusetts Supreme Court and lost.  It then skips ahead a hundred years to a similar case in Kansas, where a girl named Linda Brown and 200 other families sued the Topeka, Kansas school board and won, paving the way for desegregation throughout the nation.  The pictures in this one are lovely and there is a timeline of segregation in the back along with a bibliography that includes videos that I think kids might find interesting.  I think this book will make an excellent teaching tool in many classrooms. 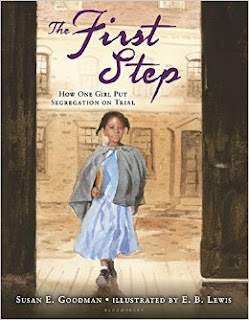 The last one is called "Giant Squid" by Candace Fleming.  It's all about giant squid and I didn't think I really wanted to find out about a giant squid, until I started reading.  The language in this one is really big-the words are specific and wonderful.  The way the words are placed on the page make it look like poetry.  The book tells that giant squids are reclusive animals and so much of what is known about them comes from inference or from finding parts of them.  The pictures in this one are also amazing.  They give you hints of the giant squid which only keeps you turning the pages to see what part you'll find next and how will Eric Rohmann (the illustrator) show the next thing.  This book invites repeated readings to make sure you saw all the parts of the pictures and understood every little piece of the text.  I loved this one and I think the kids are really going to like it too.  In case you are interested, here's a link from the author's page that has a teaching guide for the book. 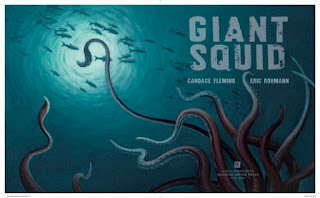