I'm plunging into the dark heart of fantasy or speculative fiction.  I haven't had a chance to go here for awhile, so I'm looking forward to it!

The first one is called "Last Day on Mars" by Kevin Emerson.  I'm going to tell you straight up that science fiction is not my favorite, but this one was a breathtaking adventure.  It's about a boy named Liam who has grown up on Mars.  His parents are scientists and they moved to Mars before Liam was born because the Earth was failing.  They've been living on Mars for the past 15 years and now it's time to leave there too because the protections they've built to help them survive there are failing. Liam is sad to leave Mars (it IS the only home he's ever known) and although he's heard lots of stories about how amazing Earth was, the new place they are going is uncertain and a bit fraught with peril.  But it also seems that there is some sabotage going on and Liam and his best friend Phoebe seem to be best positioned to help with some narrow escapes.  I really liked Liam and I liked the science aspects of the science fiction book better than I thought I would.  It's very fast paced and there's so much action that I think a lot of kids are going to like this one a lot.  It also appears to be the first one in a series-there's a giant cliff hanger at the end.  I can't wait to see what happens next in this one! The second one is more in my wheelhouse-it's a book of fairy tales called "Brave Red, Smart Frog: A New Book of Old Tales" by Emily Jenkins.  Emily has written some terrific stories-she wrote one of my favorites last year called "Toys in Snow" which is just like it sounds-some toys go out and play in the snow but it's a lovely little imaginative story with lots of great language.  Brave Red, Smart Frog is kind of like that too.  It's 11 favorite fairy tales retold.  Each chapter is a different story so they go FAST.  Each one is like visiting a familiar place that's had a really great make over.  All the things you love are still there but it's somehow better and fresher than the one you remember.  I think my favorite retelling was the one about the Princess and the Frog.  In this retelling, both the Frog and the Princess make some big changes and I liked them both better for it.  One of the things that keeps you anchored in the old school is the art work which is beautiful and somehow very traditional yet modern at the same time.  I really liked this compilation and I can't wait to put it in my library.

The last one is the third and final (I think) installment in this series.  Two years ago, Gordon Korman came out with a completely brilliant science fiction story called "Masterminds".  It's about a group of people who live in a perfect small town in New Mexico that is very isolated.  It's so isolated that people don't really come and go from there.  The kids grow up thinking that this normal (well, for them, it IS normal).  Until one day, two of the kids decided to go out of town.  Not leave town, just go and investigate some things that are just beyond the border of the town.  As the approach the border, one of the boys, Eli, gets violently ill.  The other boy calls emergency services and Eli is scooped up and rushed to the hospital.  He's sick for a few days but then he's fine.  The other boy is GONE when Eli is released from the hospital.  Eli's dad tells him that he's been sent to live with his grandmother and suddenly, in a community where honesty is valued above all things, Eli starts to think that maybe people aren't really being all that honest with him and with all the other kids in the community.  It turns out their parents have a REALLY big secret.  It would be a total spoiler if I told you exactly what the secret is (because it's totally awesome), so I won't.  But I will tell you that the third book takes up where the second one leaves off.  This one is a very thrilling adventure full of wild chases and ethical dilemmas.  It also has a very satisfying ending to the whole story.  I thought this one was great. 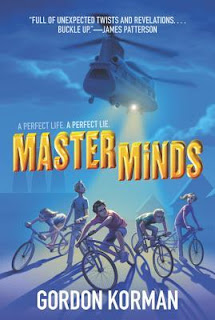 Posted by The Booksearch at 4:41 AM