Here are some terrific books about science.  They are picture books but one of them is big enough for really big kids!

The easiest one (possibly the most beautiful) is called "Water is Water-A Book about the Water Cycle" by Miranda Paul and illustrated by Jason Chin.  I mention Chin because these pictures are like poetry.  I know when I read this one, the kids are going to gasp as I turn the pages and say "Whooooaaa"  I love it when they do that!  The text is really great too.  It's quite simple but poetic (you won't mind reading this one several times) and the vocabulary is terrific.  But it's about the water cycle so there's science too (science AND poetry?  Can it BE?) and it has this very fun leading structure.  You really need to look for this one, there's a lot to like about it. 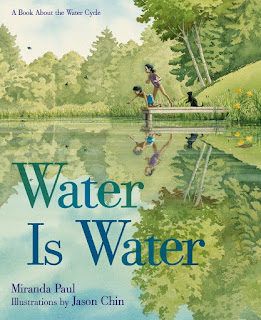 The second one is sort biographical but it's also about the scientific method.  It's called "Mesmerized - How Ben Franklin Solved a Mystery that Baffled all of France" by Mara Rockliff and illustrated by Jacopo Bruno.  So this is non-fiction about a part of Ben Franklin's life, when he went to France to get them to help out the American colonies.  Everyone in France thought Ben Franklin was awesome, especially because he was so interested in science.  Remember his experiment with electricity?  Well at the time, there was another guy named Dr. Mesmer who was going around France impressing people with HIS science, which was a magic wand and when he would point it at people they would see, hear, and feel things that weren't really there.  Ben Franklin came up with a test to see if it really worked where he blindfolded people and then let Dr. Mesmer try again.  I won't tell you how the story ends but suffice it to say, we still use a blind test today to find out if our science is really true.  I liked this one a lot and the pictures are gorgeous!  I think this one would be a good one for bigger kids because there is a lot of text.

The third one should go in the biography section (according to the spine label from my local library) but to me, it doesn't tell enough about George Ferris's life to qualify as a biography, but who am I to say?  Anyway, this one is called "Mr. Ferris and his Wheel" by Kathryn Gibbs Davis and illustrated by Gilbert Ford.  It's all about how George Ferris came up with the idea for his famous wheel, which was the Big Wow at the Chicago World's Fair.  It turns out that no one thought this was a good idea and it was super difficult to get funding for the project.  But, he persisted and everyone loved the Ferris Wheel.  It would be a great book to talk about persistence.   The pictures in this one are gorgeous watercolors and I thought they added a lot to the text.  There are also facts about the Chicago's World Fair and the time period through out the book.  I liked this one a lot.   Here's a little book trailer about it.

Posted by The Booksearch at 1:03 PM