New picture books to look for about cooperation

I LOVE picture books.  I love the directness of the language and how the pictures add to each layer of the story.  These are two new ones that I think will be great in my library.

The first one is called The Golden Acorn by Katy Hudson.  Katy Hudson has written and illustrated some terrific books like Too Many Carrots or Runaway Baby Brother, but I think this one is my favorite.  It's about Squirrel, the fastest animal in the forest.  She loves being the fastest and has a room full of trophies to prove it.  There is a competition every year for the Golden Acorn and she always wins!  Except that this year, they've changed the rules.  This year, all the animals must compete with a team.  Squirrel is dismayed and first she tries to get her friends in shape and then she  gets mad that they aren't keeping up.  She eventually figures out that her friends are the most important part of the race and it's a happy cooperative ending.  I really love the art work in this one.  The pictures are warm and exuberant and just plain adorable.  The message is terrific-working together is better than on your own.  This one came out in the first part of July.  I can't wait to put this one in my library. 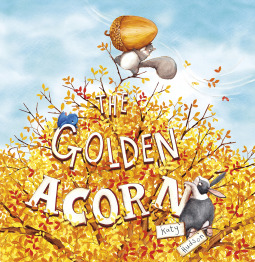 And here's a video of a Katy Hudson's studio tour!

The second one is called "Trini's Big Leap" by Beth Kephart and Alexander de Wit.  It's about Trini, who's really good at everything!  She's an excellent gymnast, she's good in all her school subjects, she's just awesome!  Until one day, she tries building a tower and it's terrible!  Then she tries building a tower with her friends and it's just awesome!  This is another one with a really nice message for the little kids.  In today's age, when lots of little kids are spending time alone on screens, having time and a message that you need to play with other kids is terrific.  Noticing that the other kids are helpful and kind is also good.  The pictures in this one are bit more subdued-the colors are quieter and the pictures are more simple but in a good way.  This is also a really nice book and it would be great to start the school year with for the really little kids.   This one comes out in August, so look for it before school starts! 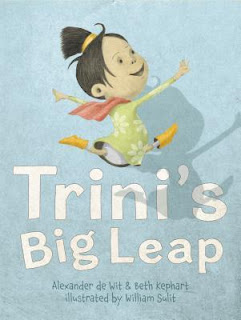 And here's the book trailer for it!

Posted by The Booksearch at 7:06 AM No comments: