Now for some real action

This week I got to dip back into the Netgalley pool.  There have been some titles languishing, unread, there for many weeks so it was great to be able to read some of these new ones.

The first one is a magical fantasy book.  It's called "The Evil Wizard Smallbone" by Delia Sherman.  It's about a boy named Nick who has been living with an abusive uncle, Gabe, and his rotten cousin, Jerry.  Nick's mom died sometime before and Nick has gotten tired of the abuse from both of them.  One day, after a violent altercation with his uncle, Nick runs away.  There is a terrible storm and he ends up at the home of the Evil Wizard Smallbone.   The wizard decides that Nick would be a good apprentice (although at first, Nick is just looking for a way out), but the wizard has other ideas.  There is another even more evil wizard about, and the Evil Wizard Smallbone is looking for a way to defeat him.  This one is funny (Smallbone has a gift for transfiguration and as consequences, he turns his apprentices into other things, with some very surprising results) as well as mysterious and just a little bit scary.  The characters in it are very likable although they are a bit prickly at first.  I liked this one lot and I think the kids will like this one too. 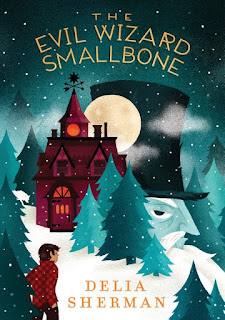 The second book is from a series that I started quite some time ago.  In fact, I didn't recognize the title, but I did recognize the story once I started reading, and it was good enough that I kept reading, which is pretty unusual for me.  The first one in the series is called "Ennara and the Fallen Druid" by Angela Shelley.  This first one introduces Ennara, who comes from a magical family and was marked as an infant as having special magical powers.  She's been getting magic lessons from her aunt but the evil shapeshifters seem to be gaining power, making bolder moves until Ennara is forced to confront the big evil.  She is surrounded by friends who also have magical powers as well as mentors and teachers.  It's quite well written and very fast paced-lots of action and lots of plot twists with vivid descriptions.  I liked this one a lot.  I also got to read the second one in the series, which is called "Ennara and the Book of Shadows".  Ennara has come back home and is enrolled in magic school, but some of the professors and other kids don't really like her and are trying to thwart her.  However, the evil shapeshifters make a reappearance and it's up to her and her friends to save the world.  This one was equally exciting and compelling to read.  This one starts to give Ennara some romantic connections, which I didn't care for, but teenagers seem to like the sighing and the smoldering gazes...
This one also started to remind me a lot of Harry Potter-the group of kids, each with different magical talents, who come together to face a big evil, but one of them is more powerful and holds the group together.  I think middle schoolers will like this series a lot, but it's probably too big for the elementary crowd.   Here's the book trailer.

The last one is out of my usual element-It's called "Iron Man- The Gauntlet" by Eion Colfer.  I'm not exactly sure where this comes in the Iron Man story, I haven't seen the movies or read the comic books or anything else about Iron Man but this is a very exciting story.  It starts with a bit of background information about Tony Stark, the main character, who is a genius and is motivated to do good in the world because his father owned a company that developed weapons that killed lots of people.  Tony has developed a suit that is Iron Man and is so technologically advanced that you can operate with your mind and it has millions of self protection features, including an artificial intelligence system.  It turns out there are some chinks in the armor and Tony is put in some very compromised situations and yet manages to battle out with his superior intellect.  It's a very fun and exciting story to read.  I struggled a bit with it because there are several incarnations of the suit and the artificial intelligence interface in each one is a different name (and sometimes multiple different names, as the AI can change as it evolves).  I think the kids will love this one. 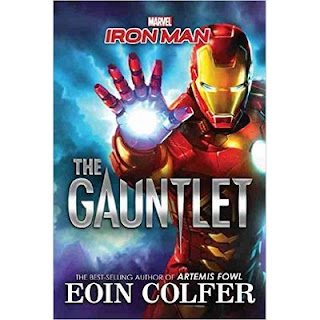 Posted by The Booksearch at 9:24 AM No comments: